My name is Ross Moyer and I’m a student at CGMA. I’m from Pennsylvania in the United States. My educational background is in Economics and I’ve worked in Medical Records as well as Accounting. CGMA is the first art school I ever enrolled in. I’ve really enjoyed it! 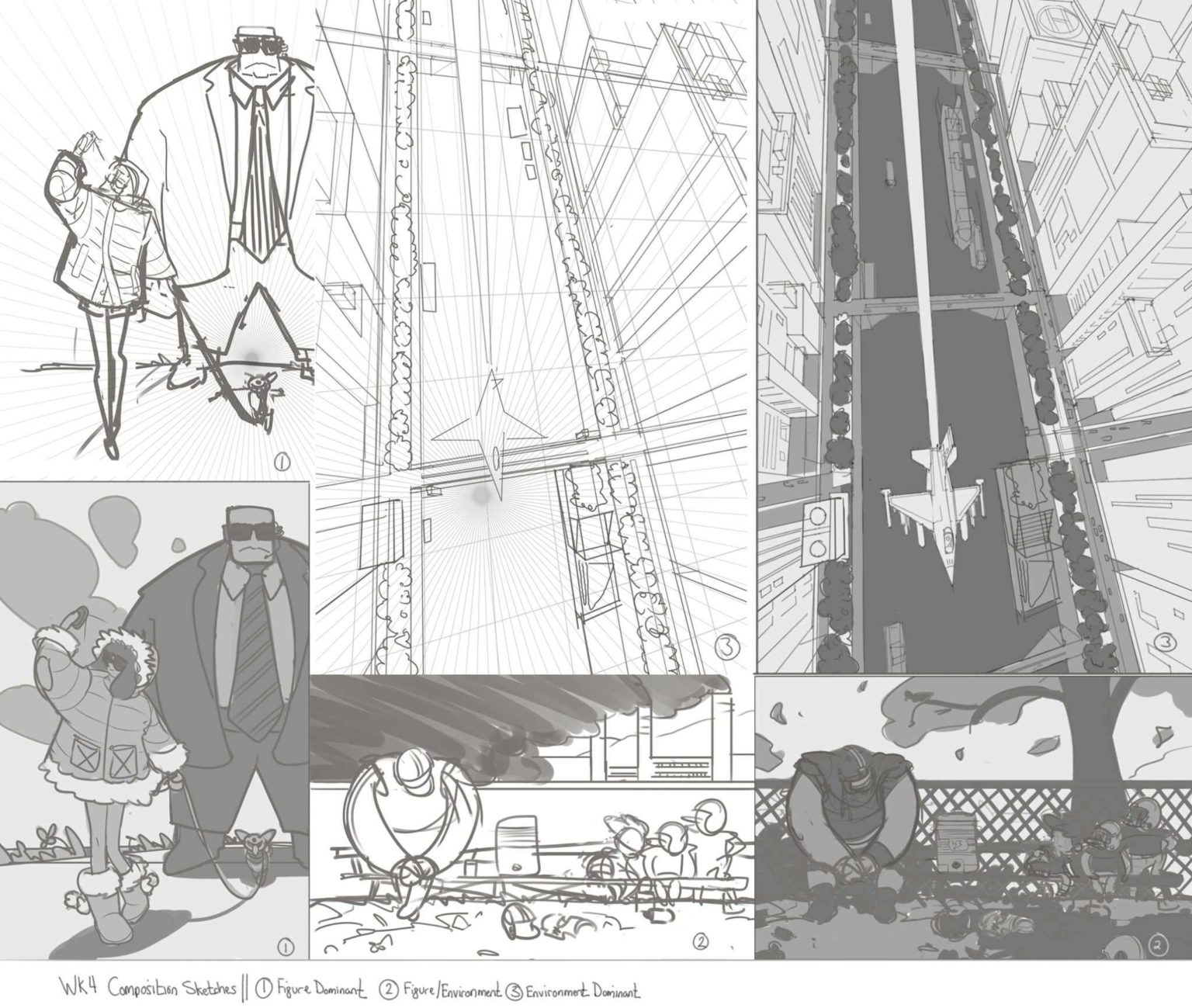 For the first assignment, I sketched the first drafts of three different scenes, each with a different purpose. My figure dominant sketch is about a rich girl out having fun with her dog while her giant guard protects her. I made the characters take up about 70% of the picture frame. I put the guard in because I thought his gigantic proportions created a nice contrast with the girl and her tiny dog. 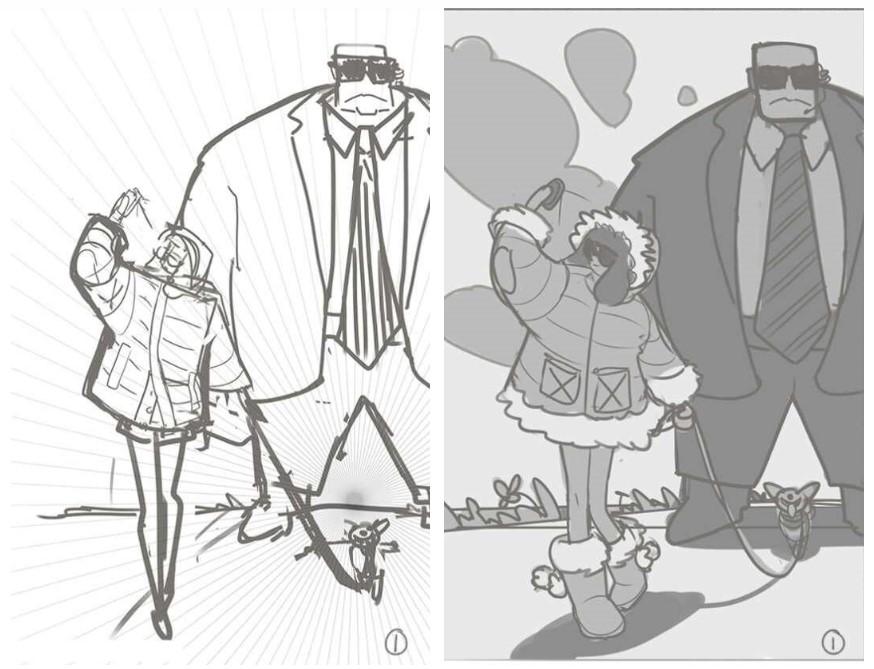 In figure/environment composition, I tried to find a balance between the two by having them both be important to the story. The big kid is supposed to be feeling a sense of loneliness since the other kids are afraid of him. To show this, I seated him far down the bench from the group of little kids. I put a water cooler between them to increase the sense of isolation. Plus, I positioned the big kid outside of the shelter of the tree to make him look vulnerable.

The fighter jet was the focal point in the environment dominant composition and it provided a sense of scale. I drew it small to make the city look very large by comparison. I added the jet trail coming from its exhaust to lead the eye through the city to the airplane. 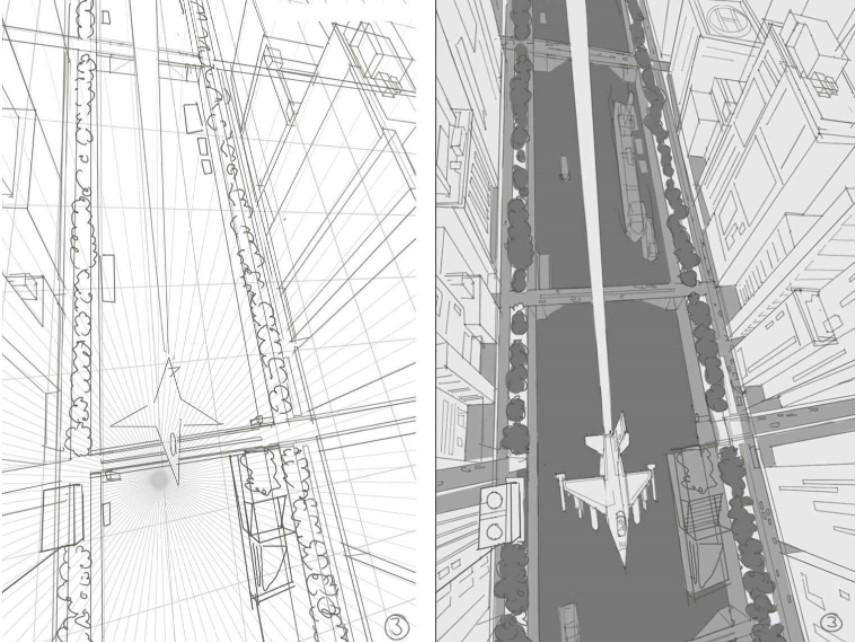 I think the main strength of the figure/environment sketch is the interaction between the little kids looking at the big kid and the big kid sadly looking down. To reinforce the idea he was unhappy, I kept the big kid in shadows, then put the kids in more light to make them seem happier. 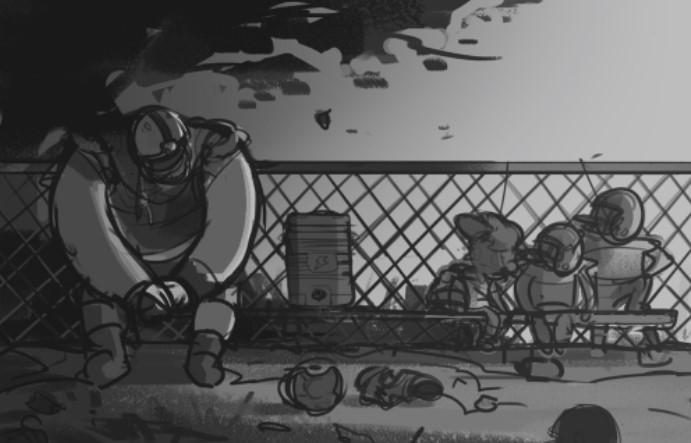 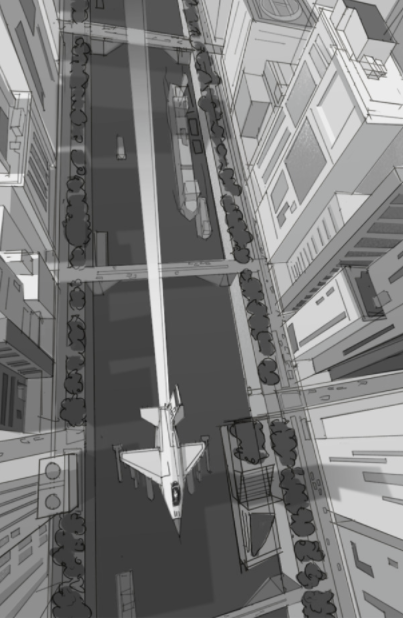 Taking Mauricio’s suggestion at our Q&A session, I completely redid the figure dominant composition this week. I think the compositional changes really paid off. The new design made arranging the values easier. For example, it was really useful to have the guard with his back to the girl. It allowed me to use his back as a dark frame for her light face. 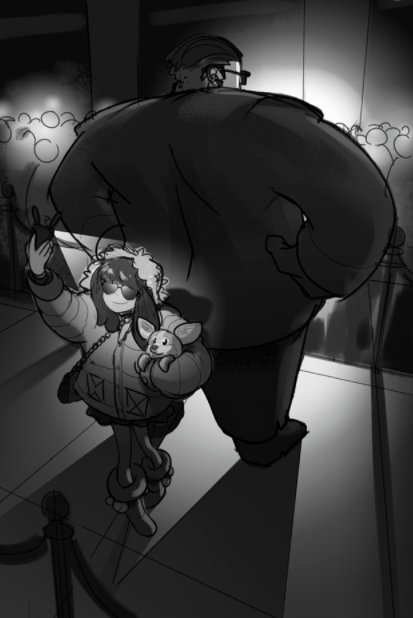 We had two potential assignments this week. The first option was to do 3 color studies of one of our value studies from Week 5. The second option was to pick a value study and render it out in full color. I chose the second. 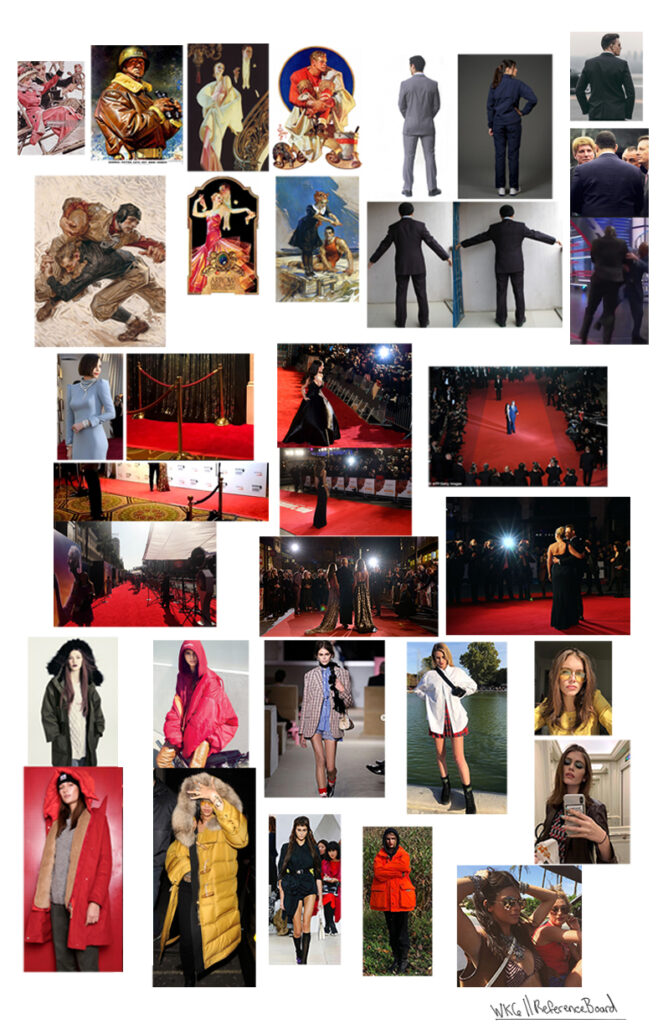 I didn’t have a hard time picking a color palette, thanks to my reference board. Looking at images of red carpet events, I pretty much copied the color scheme from the red carpet photos I saved. This consisted primarily of dark blues/purples with bright, highly saturated reds as secondary colors and then some other warm accents. 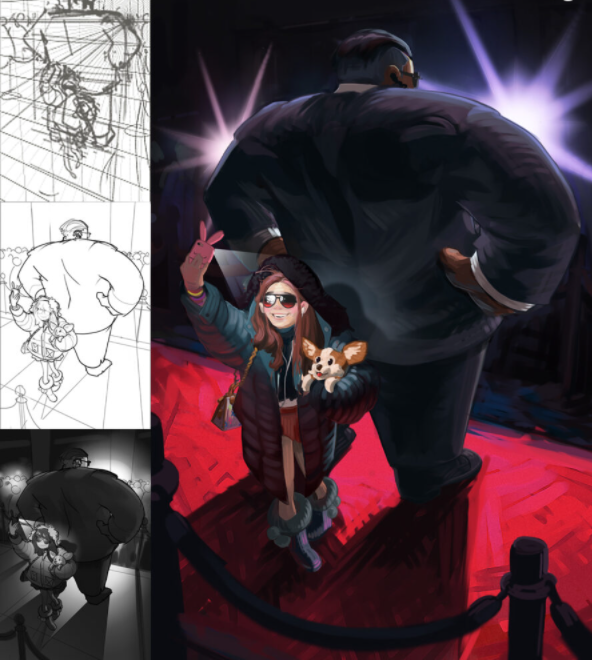 I did a lot of trial and error to figure out how the characters should be colored. To starts, I made silhouette outlines that I could quickly color in with a bunch of different combinations until I found something I liked. Then, I made the girl’s face warm to contrast with the cool colors on the guard’s back. I also added some camera flashes and more warm colors on the guard’s face and hands. These strengthened the circular rhythm that goes from the girl’s face, around the guard’s shoulders, and back to her face. I colored her jacket a greenish-blue because that seemed to blend in well with the reds/blues elsewhere in the picture. 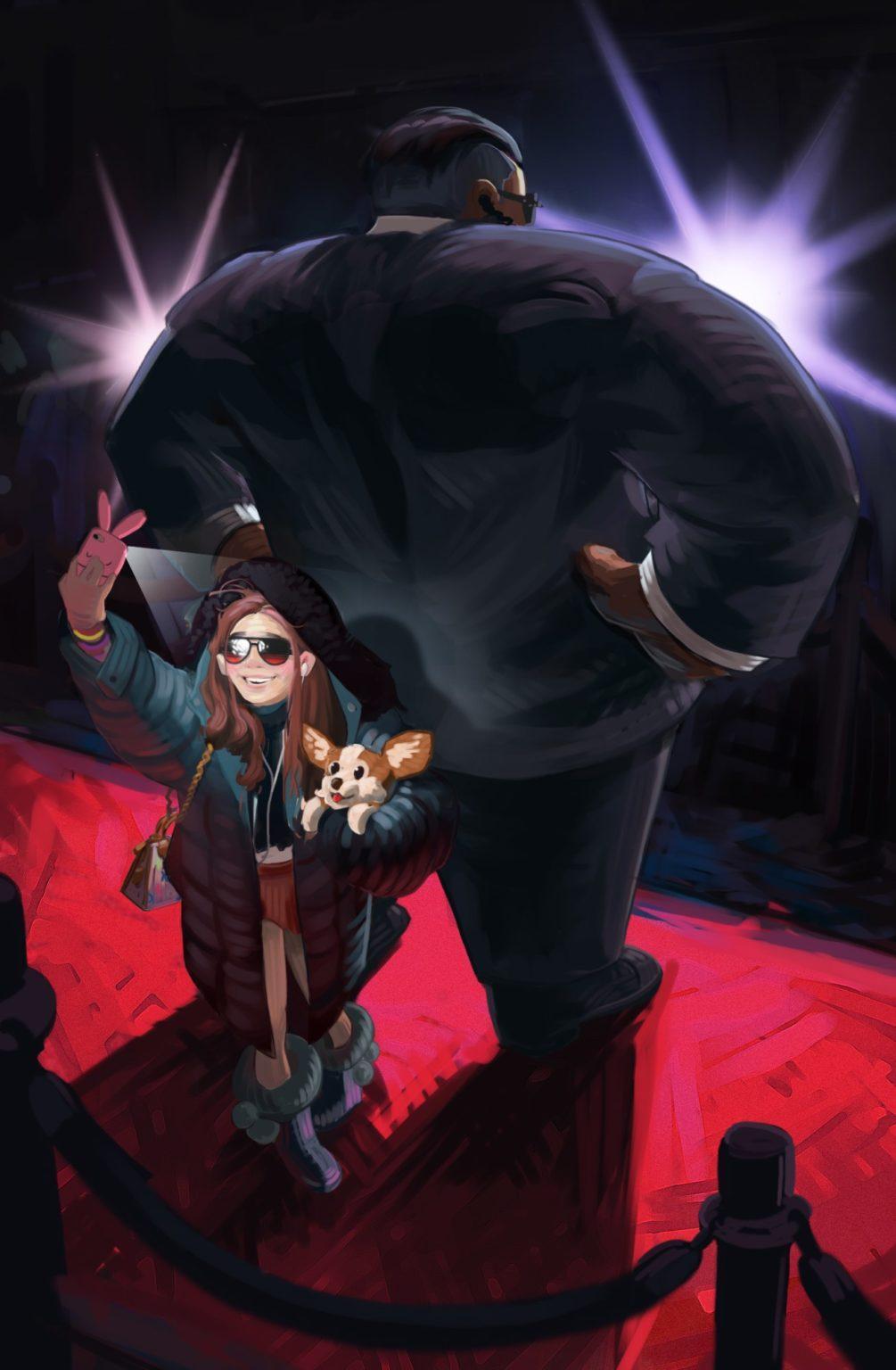 Overall, this was the most important and fun part of the course for me, so I took my time and I’m happy with the result.

For a storyboard, I went with a dramatic basketball scene about a player so fast, he snatches the ball seemingly without moving. This was a tricky idea to create in six shots, but fun to make.

I picked a movie poster because I liked the examples Mauricio went over in our lectures. I knew from the very start my poster would have a big, flat nose truck. After doing some more research I decided to give the poster a Mad Max type of theme. I looked at a lot of trucks and rock stars for reference. 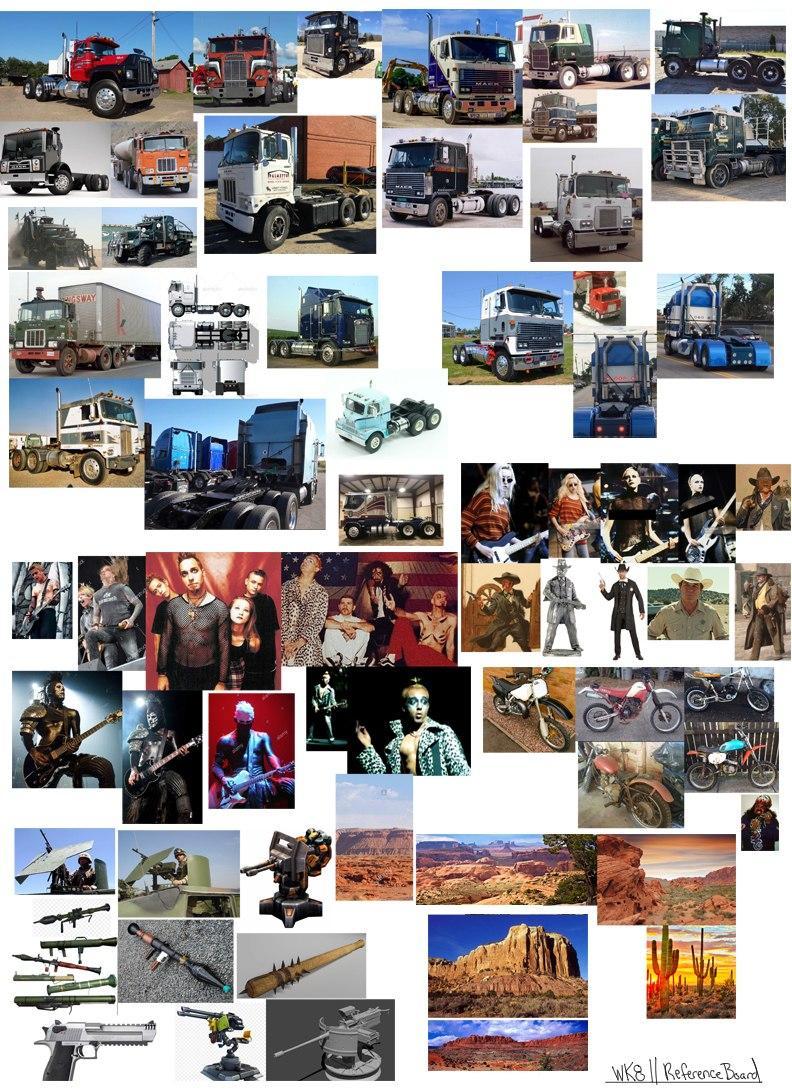 I painted smoke streaks in the background because they added a nice diagonal element to break up the composition. This was perfect because it also fit the narrative I was going for. Since the characters were outlaws they could have burned down a gas station or a town somewhere behind the mountain. 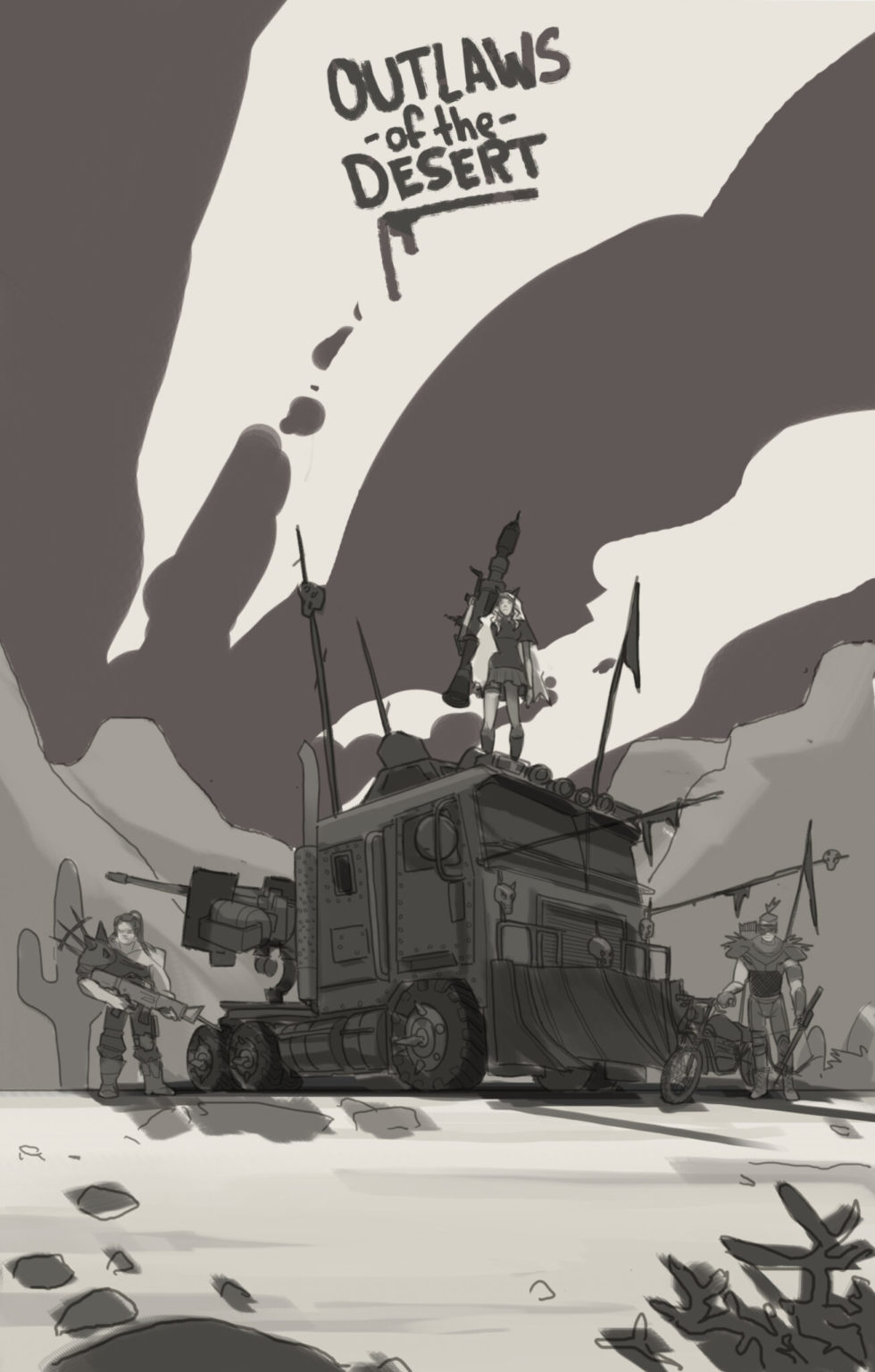 The lesson I wanted to highlight the most in this assignment was to create a simple, impactful composition. Additionally, I wanted to keep in mind the constraints of the poster format by incorporating a title into the picture and leaving space for movie credits at the bottom.