8 mind-boggling facts about the making of Toy Story 4

8 mind-boggling facts about the making of Toy Story 4

This inside knowledge will change the way you see the film.

The first full adventure for Woody, Buzz and the gang since 2010, Toy Story 4 didn't just introduce new characters like Duke Caboom (above), Gabby Gabby and Forky. When it came to the level of visual detail and complexity, it brought things to a whole new level.

Last year at Vertex, the sell-out event for 2D and 3D artists brought to you by our sister magazines ImagineFX and 3D World, Pixar’s Dylan Sisson spilled some of the secrets of how the Oscar-winning animation was made.

If nitty gritty 3D tech details are what you're after, you'll find many of these points covered in our article behind the scenes of Toy Story 4 (and you may also want to check out our top free textures).

Read on for 8 mind-boggling facts about the making of Toy Story 4.

01. The level of detail was just incredible 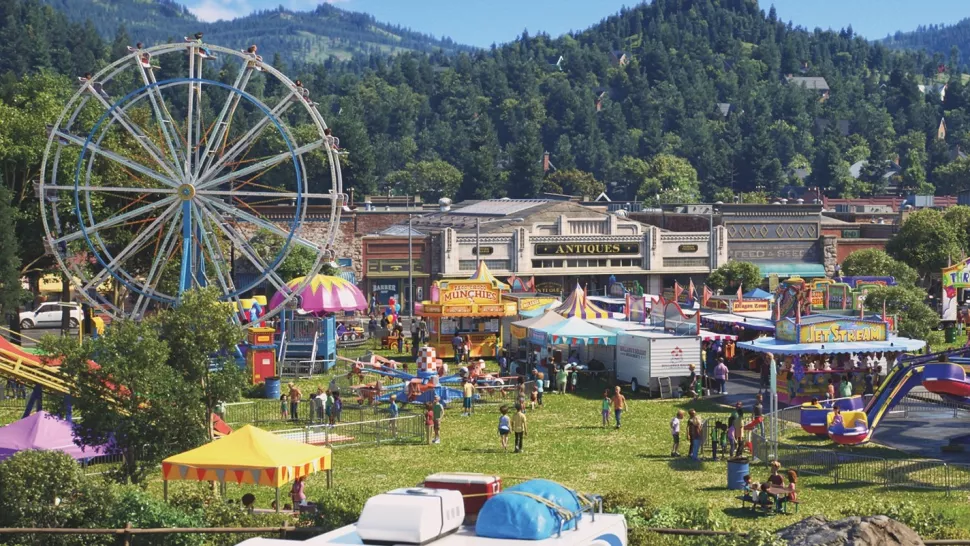 A few numbers will illustrate how far Pixar has travelled recently in terms of the level of detail in its scenes. Sully from Monsters, Inc. in 2001 was famously covered in over one million hairs, which was impressive at the time. But fast-forward to 2019's Toy Story 4 and even that number starts to look tiny.

"For instance, if you count all the leaves on the trees in this movie, you’d have about six billion," Sisson noted. "That’s quite a bit, right? Unless you start counting the needles on the pine trees. We had over a trillion pine needles in the carnival scenes. This is the size and complexity that we’re dealing with now."

Shortly after, Sisson made mention of 50,000,000 individual dust fibres too, but we were starting to pass out from the shock, and it all became a bit of a blur.

02. It all took an astronomical amount of computing power 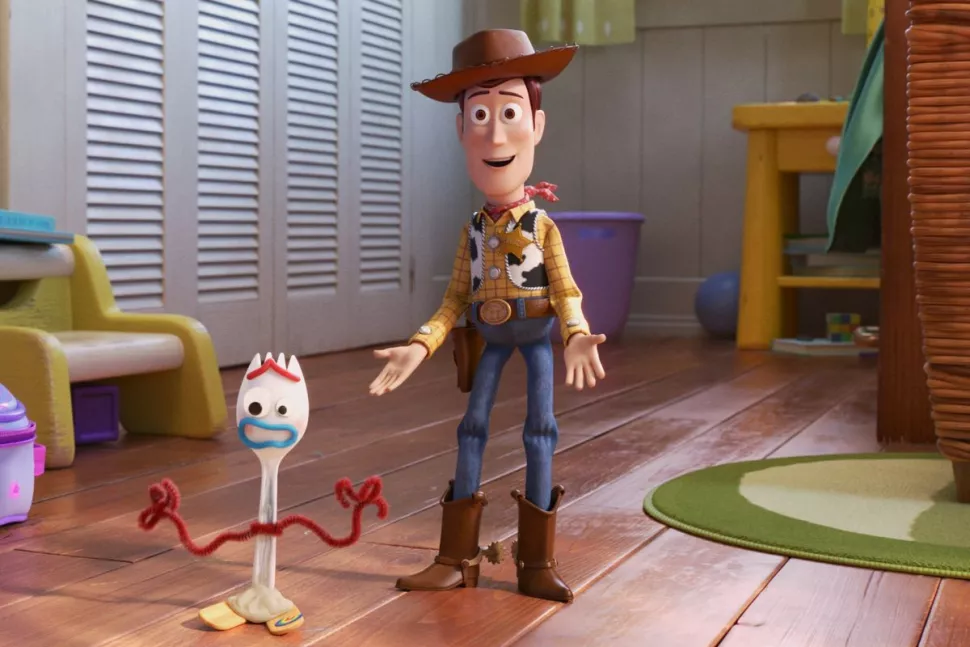 One of the most costly and time-consuming parts of the animation process is rendering, which basically involves high-powered computers pulling together the various elements of a CG scene, including all the geometry, lighting and motion effects, into the perfect final image.

At Vertex, Sisson stunned the audience of 2D and 3D artists by showing them a single frame from Toy Story 4, and revealing how long it took to render. "This is the most expensive frame in Toy Story 4, and it took about 325 hours to render on four cores," he revealed, to audible gasps. "So that's over 1,200 hours per frame."

Why so long? "We had a chandelier taking up half the shot," he explained. "And in order to get the transparency, those rays [of light] had to bounce around this giant warehouse. So that took so much time to render - and that’s including running a de-noise pass on it."

When Sisson was asked in a later panel whether a chandelier was really necessary for the scene, he jokingly shrugged and remarked ruefully: "We could have had a pinata instead; that would have saved us a lot of trouble."

03. Pixar broke some of its own lights... on purpose

There were over 17,000 lights in the carnival scene - but not all of them worked (Image credit: Pixar)

When you're making a 3D animation, one of the most challenging things is to create lighting and shadows that look natural, and the more elements there are to light, the trickier that becomes. So Toy Story 4's carnival scene was no picnic for the artists at Pixar.

"There were over 17,000 lights in the carnival scene," Sisson explained in his talk. "We had the Ferris wheel, we had all these different rides, and they were all creating illumination. So we didn’t really have a direct light source in the night time scenes, we just had this pool of light from all these individual lights."

And here's our favourite fun fact: Pixar ensured a super-high level of realism by making sure not all the lights were actually working! "In fact, three per cent of these lights are burnt out," Sisson revealed.

This is not something most viewers are going to notice consciously, but on a subconscious level, it really helps you believe in the world. And it's this kind of clever thinking that really marks Pixar out from the pack. This was just the tip of the iceberg when it came to lighting cleverness, though.

04. Globally Calibrated Exposure allowed lighting to be both more efficient and more realistic

More importantly Pixar used a technique called "Globally Calibrated Exposure", which means all the lights in the movie were calibrated, allowing the lighting team to have exposure control baked into their setups.

“If you’ve ever used a DSLR and changed your aperture, we basically created the same kind of setup for Toy Story 4," explained Sisson. "This is a practice that’s common in visual effects for movies, but this was the first Pixar film we rolled this out on, and it really gave a physically based realism to the lights. It was also very efficient because we could accurately change the exposure for different shots, from night to day." 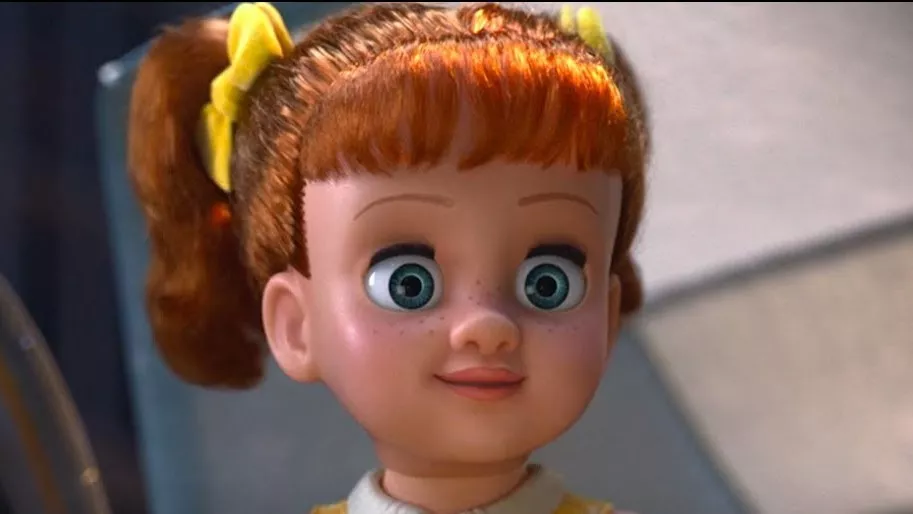 One of the new characters in Toy Story 4 is Gabby Gabby, a vintage doll created in the 1950s who's voiced by Christina Hendricks. She's a redhead in the movie, but originally she was meant to be blonde. Why the change? Because, would you believe it, it made her cheaper to animate.

As Sisson recalled, "The character design department pitched over the original design, and the technical team was like, “Does she have to have blonde hair? That takes like five times the amount to render as she would if she had red hair. And she’s in a lot of different scenes.”

The character department agreed to the change, and the technical department breathed a sign of relief. Because as Sisson explained, blonde hair is more challenging due to the way it interacts with light.

"In order to render blonde hair, we’re not just rendering the yellow colour; we’re sending a ray in and it’s bouncing around maybe 80 times within the hair," he said. "Blonde hair is really transparent hair, so if we make it less transparent and more opaque then maybe we send the ray in and it bounces around about eight times. That reduces the rays we're sending in the scene, and reduces our workload considerably. We get a good result either way, but it’s a cheaper one with red hair."

06.Duck and Bunny were super-expensive to make 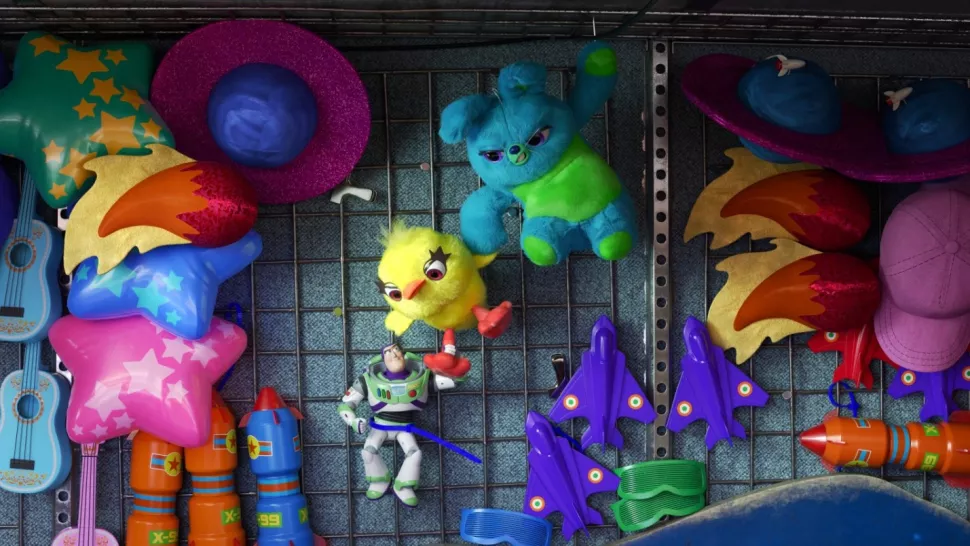 As the example of Gabby Gabby shows, Pixar is always looking for new and inventive ways to save money. But Sisson stressed that this should never be at the expense of the story's needs, and offered an example of when the character designers pushed back on a technical request.

It involved another couple of new characters in Toy Story 4, Ducky and Bunny: two carnival toys who have longed for a kid to call their owner. "They're these incredible twins with neon yellow hair and neon blue hair," he explained. "Well, neon yellow hair is the most expensive hair you can render. And if you have neon blue hair, that’s super-expensive to render as well."

So, as before, the technical team went back to the designers. "And they were like: 'Can’t they just like be brown and black?' But the response was, 'No, they have to be these colours!' So the technical team took the hit for all the shots they were in, because it was important to the narrative.”

07. The cobwebs were woven by AI spiders 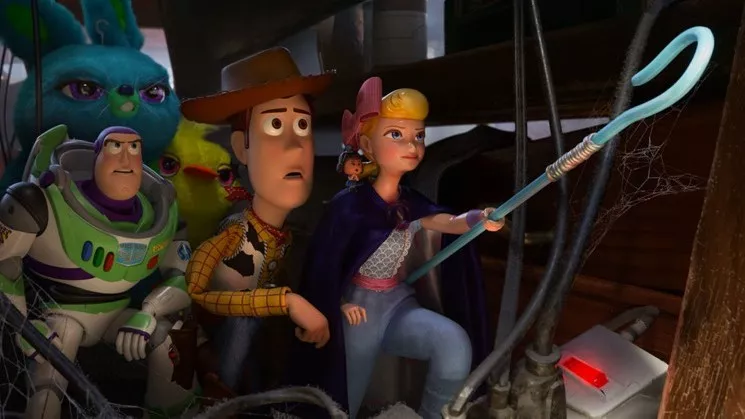 The story of the cobwebs was one of the most surprising parts of Sisson's talk. "We had some software bugs in Toy Story 4 which actually helped us," he revealed. "We created these AI spiders in Houdini, and they would go into these nooks and crannies and start weaving webs. We’d render these webs out and that was pretty helpful."

Just let that sink in for a moment. The cobwebs you saw in the film were not crafted by human artists, or pulled in from a reference library, but generated by digital spiders that don't actually exist. We are so living in the future right now.

08. There are endless Easter Eggs to discover 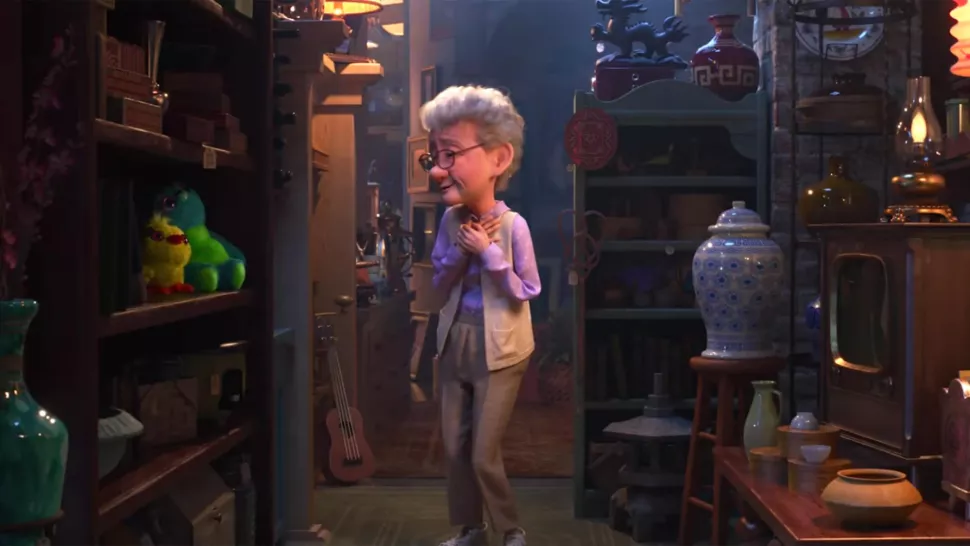 If you have young kids, a time will probably soon approach when they just want to watch Toy Story 4 on repeat, all day long. But don't worry: even if you eventually tire of the plot, you can always amuse yourself by looking out for Easter Eggs. And according to Sisson, there's a LOT to look out for.

"Check out the props in the antique warehouse," he noted, "because we have over 2,000 props from previous Pixar films." Pointing at the screen, he noted: "Here's some carnival stuff from Coco that we just dragged in, here's a snow globe from Knick Knack [a Pixar short from 1989], here's Arlo the Good Dinosaur, here's a Pixar image computer... so there's a bunch of stuff in there to look for."

Yes, you read that right: over two thousand. Have fun trying to find them all!

Sisson will return for Vertex 2021 on 25 February where he will give an inspiring talk on making art with soul and exploring stylised art with RenderMan. Don't miss out on the ultimate virtual event for 2D and 3D artists, buy your ticket today.