MainOur blogArticlesDrawing in Action: How Movement in Art is the Key to Success

Drawing in Action: How Movement in Art is the Key to Success 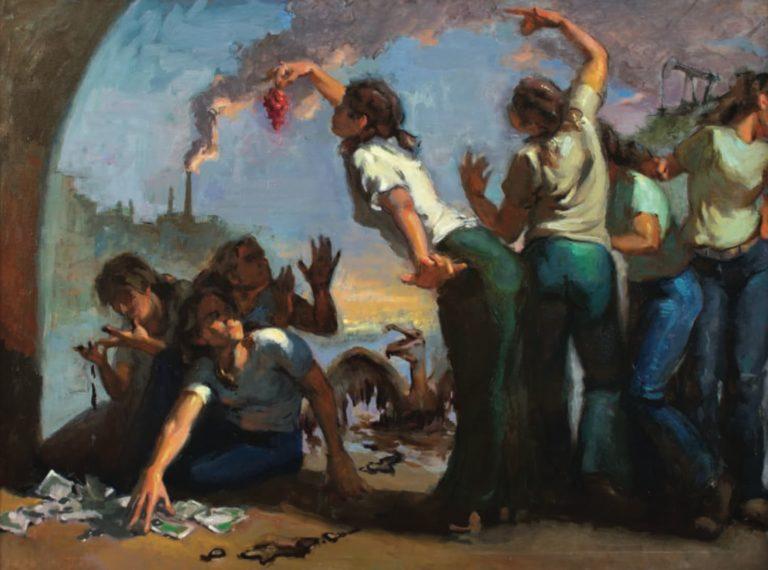 Drawing in Action: How Movement in Art is the Key to Success

Patricia Hannaway believes that, with the right approach, movement in art can be captured in less than a minute.

Patricia Hannaway has concerns about the state of representational art, especially when it comes to movement in art. “A lot of the realist work I see being done today is very oriented to surface,” she says. “It’s highly rendered and often quite beautiful, but it can feel very still, and it doesn’t really sing to me. It sometimes seems like the artist is chasing a photographic likeness. And when you try to be photographic, your drawing can lose a lot of life. We’re not just cold eyes copying things — we have to be emotionally involved. In the work of the great artists there is tremendous feeling. That’s why it moves us so much.”

Moving Beyond the Surface 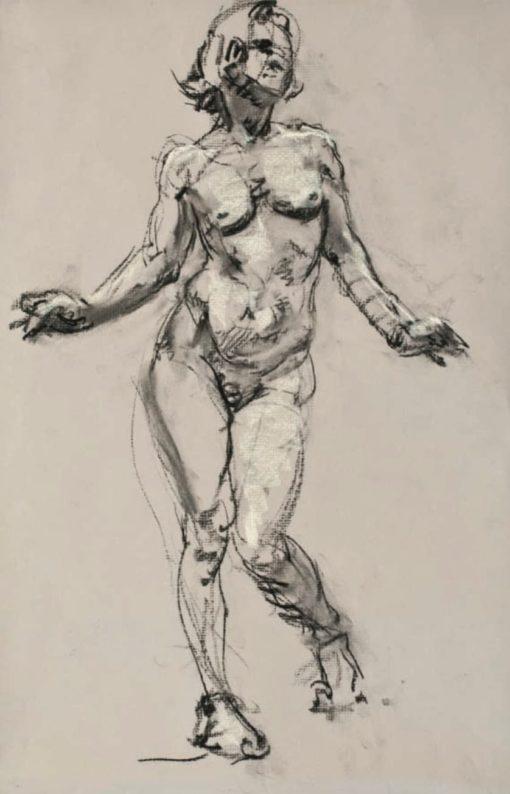 Hannaway believes in the merits of skills-based art education but also feels that it has its limitations. “Solid training is essential,” she says. “Fine art is a craft, which requires years of practice and study of such topics as perspective, anatomy, and color theory. But as these principles are being learned, one must concurrently develop the imagination through composition and memory training, playing with ideas and expression. An artist must use technique in service of his or her vision but not be so governed by it that the work becomes about the technique. It is a great challenge.”

When Hannaway sets out to depict a subject, she tries to focus on its essence. The artist has spent much of her career as an animator. So perhaps it’s not surprising to learn that in many cases, she finds that the essence of her work has to do with movement in art. “You have to feel the kinesthetic sense of your drawing,” she says. “If I’m animating a bear, for instance, I’ll go to the zoo and spend weeks watching and sketching the bears — seeing how they stand up, how they react to things. I ask myself, what makes a bear a bear, as opposed to another animal? What is its essential form? Then, when I draw, I don’t focus on every hair on its body, because that’s not what’s important. What’s important are the big actions that reveal the subject’s essence.”

In the 1980s Hannaway was a member of the first class to graduate from the New York Academy of Art, where she received training in traditional subjects. “It was a wonderful group of people to learn from,” Hannaway says. But she also felt that the school’s emphasis on traditional techniques — in particular a reverence for 19th-century realism — wasn’t fully preparing her for the more contemporary forms of expression in which she was interested.

Hannaway next attended the School of Visual Arts, where she earned a master’s in computer graphics. This led to a job as an animator at Disney, where she worked on such films as Pocahontas and Mulan. “At first I thought animation seemed like a big diversion from where I was going,” she says. But soon she found that the experience of drawing from the live model was as highly valued at Disney as it was in the academy. “It was draftsmanship oriented toward gesture and movement,” she says. “A model would come in and take 1-minute to 10-minute poses. You could quickly sketch in the figure, then add other poses, and create composition freely. 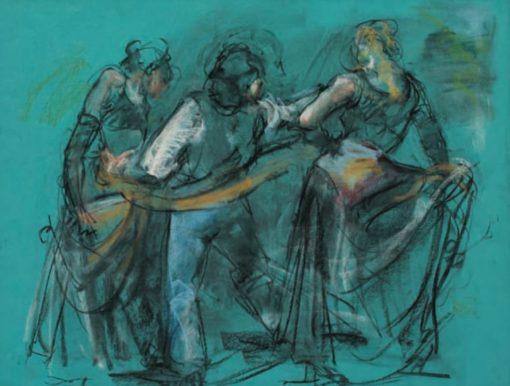 The Client (pastel on toned paper, 24 x 30) by Patricia Hannaway

“This gave me a different way of handling painting and drawing than a lot of artists have,” Hannaway continues. “I’m not afraid when the model moves or when something changes position slightly. What’s important is the movement, and being able to capture movement quickly enables me to compose. That’s a great debt that I owe to Disney and my years as an animator.”

The artist believes that in many respects the Old Masters have more in common with animators than with contemporary fine artists. “I think the method of working I learned as an animator is closer to the way Michelangelo, Rubens, Degas, and Daumier worked than the way many artists work today,” she says. “I was at the Prado recently with some animator friends, and we realized that Goya is our kindred spirit. He constantly made things move. If he were alive today he’d probably be in an animation studio somewhere.” 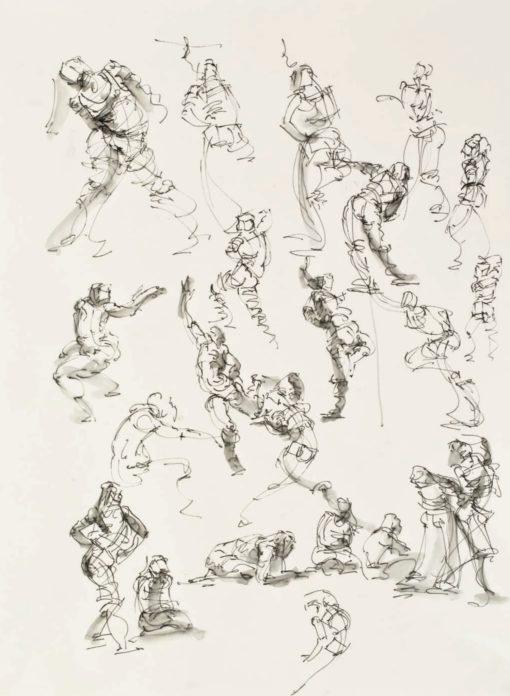 An artist’s best opportunity to capture that all-important sense of motion and life is when he or she is first drawing from the model. “I’m a gestural artist,” Hannaway says. “I create the sense of movement first with an abstract action line. Then, I build the form on top of the motion.” She recommends that artists who want to add a greater sense of motion to their drawings begin by practicing very short poses — 30 seconds or one minute. “Draw the shape of the motion, not the thing itself,” she says. “Draw how the model moves, not what he or she looks like.

For a while, it’s going to feel incredibly uncomfortable, but it will end up looking like the shape of the person. You have to trust it. 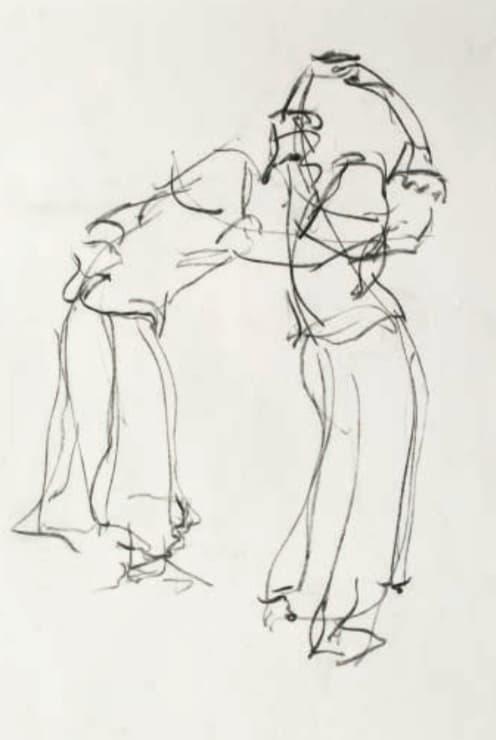 “Start with one big line that shows the shape of the whole body — you want to capture the figure’s major S-shapes or curves,” she continues. “And with a short pose, a single line can be all you have time for. With practice, you can then hang other forms, the big body parts, on top of that big shape. You want to work hierarchically as opposed to trying to finish everything — a lot of things don’t need to be finished.”

Another key to Hannaway’s method is to stay free and loose during the early stages. “You have to have the freedom to play and make mistakes,” she says. “You have to be open to see and grab onto the initial thing that drew your interest. If you’re clamped down, you’re going to miss it. And it should be fun. If you’re not having fun, everyone will be able to see that.”

Hannaway’s large multifigure paintings originate, in many cases, in gesture drawings. “I begin with 1-minute or 5-minute poses with a model, and I compose my large paintings from these quick sketches,” she says. Sometimes she needs just one session with one model to develop an entire work with numerous figures. “I get a model and in 20 minutes, we’ll take 20 poses. I’ll sketch them on one sheet of paper — all these different action lines. And sometimes I see how one pose connects to a previous one, and together they start suggesting a composition. Maybe I see one seated figure and another who looks like she’s emptying a pitcher of water. Then all of a sudden, it’s a scene at a restaurant, with a customer and a waitress.” 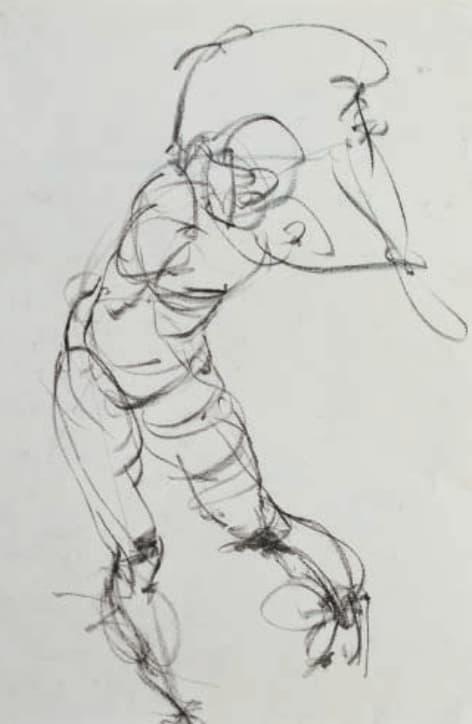 In other instances, the artist will go to a site and sketch what she sees, perhaps drawing patrons in a café. “I’ll go back to my studio and spend time drawing from my imagination, interpreting what I’ve seen, and then also work from the model in quick sketches to come up with ideas,” she says. “However you do it, the idea is to take what you see and interpret it, as opposed to just copying it. You want to make it something more.”

Once she has developed a basic composition of figures, Hannaway proceeds to value sketching, which she refers to as “stage two.” In these sketches, she works out the lighting and other aspects of the composition and scenery. She most often includes four values: two light values, a middle shadow, and a dark accent. “With a very simplified value palette, you can play with different types of light in simple ways,” she observes.

After the value exercise comes “stage three”: clarification and refinement of all aspects of the image. “This is where I start looking much more at anatomy, form, and how figures are fitting together,” she says. At this point, she’ll often have a model pose for longer periods of time to help her work out a certain figure or body part. She may also turn to her computer, where she can pose a 3-dimensional mannequin-like figure to further experiment with lighting and composition. “Some artists seem afraid of being on the computer, but it’s just another tool,” she says. “Anything that helps me clarify and better understand my subject is welcome.” 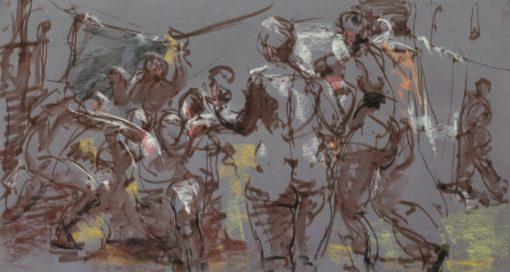 Study for Putting Up the Big Top (ink, charcoal, and chalk on toned paper, 18 x 30) by Patricia Hannaway

Once these preliminary studies are complete, Hannaway transfers her drawing to a large canvas and takes up her paintbrushes, confident that the scene will convey the sense of excitement she felt when making her first figure studies.

“After spending many years in the film industry, I wanted to see if there was a way to take my animation skill and reapply it to my painting,” Hannaway says. An opportunity presented itself when the city of Palo Alto, California, awarded her a rent-controlled studio, as well as a commission for a large painting to hang in city hall. “The piece I’m working on right now is called Objectified,” the artist says. “It deals with materialism and our obsession with having perfect bodies, especially for women. I like that I’m able to use this supposedly traditional method to make work that is contemporary in its concerns.”

Hannaway generally works in a fairly loose, gestural style, which she thinks best captures the life force of her subjects. “I’m able to reproduce every tiny detail of the human face down to skin pores and dimples if I so choose,” she says. “But I find that when I go for a photographic likeness, the result looks wooden. So I slowly keep abstracting elements, choosing what to emphasize and what to leave out. There’s a point just between realism and animation where the human mind reads the image as still being alive.”

The artist’s current paintings are in a way a summation of her experiences as an artist, animator, and educator. “It amazes me the amount of time and training it has taken me to learn all of this and finally be able to say what I want to say,” she says. “But I feel ready. It’s been a great joy to try to find ways of merging animation and drafting to make these paintings. It’s a very exciting time.” 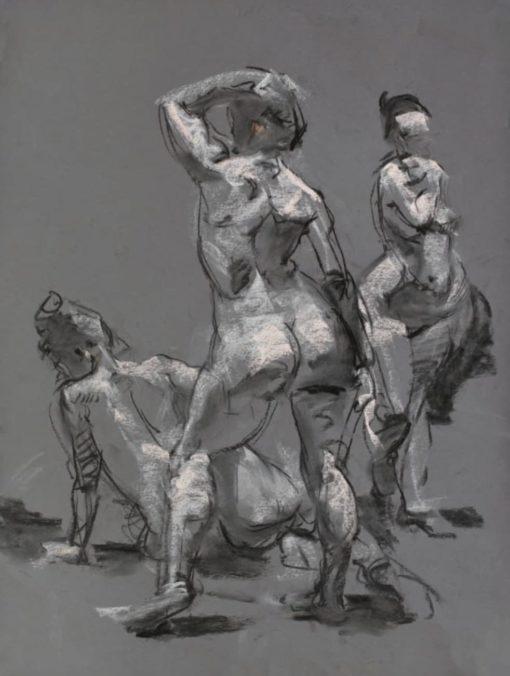 The Three Graces (charcoal and chalk on toned paper, 20 x 16) by Patricia Hannaway

Patricia Hannaway earned an M.F.A. in painting at the New York Academy of Art and an M.F.A. in computer animation at the School of Visual Art, both in New York City. She has worked as an animator for Disney Feature Animation, Dreamworks, ILM, Weta Digital, and Aardman Animations. Her films include Pocahontas, Mulan, Shrek, Star Wars, and Lord of the Rings. She has taught drawing and anatomy at Stanford University, in California, and is currently a visiting professor of digital arts at Dartmouth College, in Hanover, New Hampshire.