How to draw a dragon: 15 expert tips

How to draw a dragon: 15 expert tips

Learning how to draw a dragon can be tricky. While a staple in fantasy art for decades, designing one of these mythical creatures from scratch is a skill. Taking inspiration from real-life animals can be a great starting point, however sticking a pair of wings on a lizard simply won't cut it.

01. Start with a silhouette of your dragon 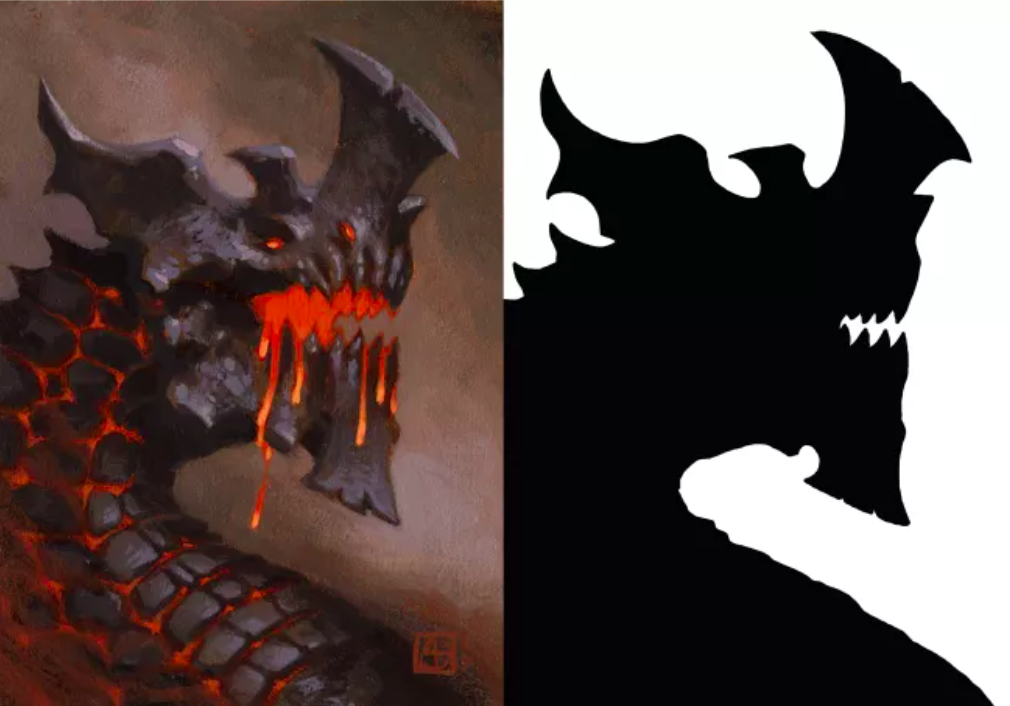 Before you jump into drawing your dragon and get lost in the details, make sure you consider the bigger picture. "For every dragon, arrange the major elements in a way that creates a good silhouette," says Alex Stone, a Brooklyn-based artist whose work has appeared in games such as Dungeons & Dragons and Smash Up.

"This helps ensure the painting will be instantly readable, even when viewed from a distance. It also helps create designs that are more pleasing to look at from an abstract perspective, even if you're aiming for a realistic-looking dragon." 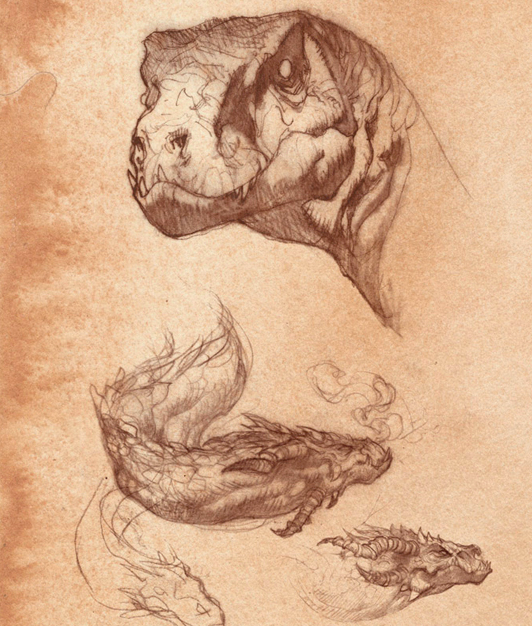 When considering how to draw a dragon, take inspiration from other animals. While dragons have a largely mythical dimension, they also exist in the real world, and there are many other creatures that can provide fresh ideas.

"Crocodiles offer what is perhaps the best and most threatening example. Of all modern-day lizards they are some of the most brutal and terrifying in appearance," suggests Gerard.

Don't restrict yourself to reptiles, however. "I study the skull shape of an animal such as a bear, lion or eel, and combine that with the teeth of an alligator or the beak of a snapping turtle," says Stone. "Anything in nature that looks interesting and inspires me is fair game. Many of my dragons are a handful of real-life animals combined to create something new." 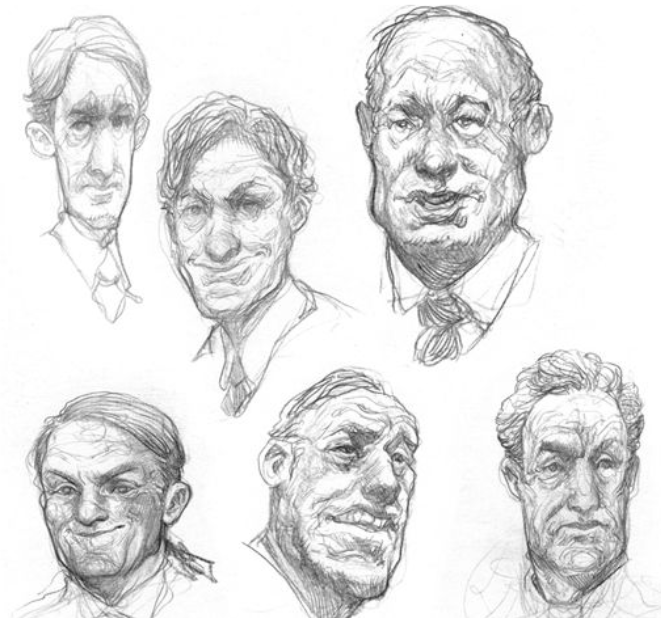 It can be helpful to use human references to inform your dragon's facial expression. "We're searching for a visual balance between a creature that captures our sense of reptilian evil and human intelligence," says Gerard.

"For humans, you could keep a folder of images from the news of sinister-looking political figures – there are some wonderfully sinister politicians out there!"

04. Create a backstory for your dragon 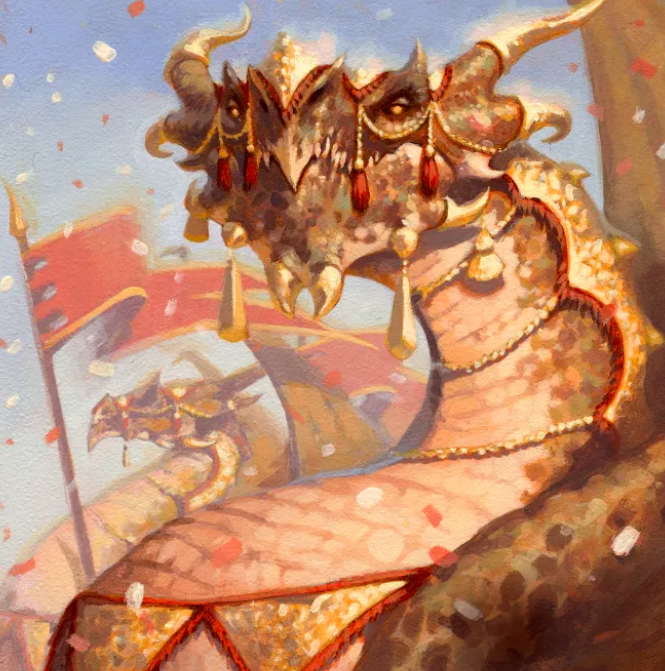 To add even more layers of interest to your dragon drawing, consider working up a backstory for your dragon. "Even in a simple portrait, there are things you can add to give the viewer a better idea of the underlying story," says Stone.

For example, scars hint at battles gone by, and could indicate a violent past. In the painting above, Stone drew inspiration from parade elephants, using flags and decorative dressing to indicate some form of alliance with human masters.

All the great literary dragons have a compelling backstory points out studio artist Justin Gerard. "In Tolkien's dragon from The Hobbit, we find a creature that provides more than just the mere threat of physical violence."

"He also offers a personification of greed – and a distinctly aristocratic greed at that (he refuses to share or redistribute his wealth, instead pointlessly hoarding it for centuries in his vast cave)," he says. "A wealth of personality can be poured into a dragon, all the while keeping its sinister features."

05. Give your dragon personality 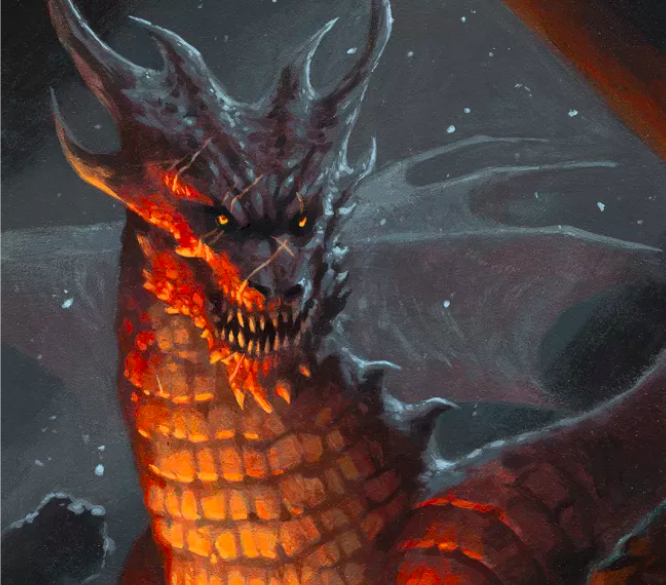 Before you start your dragon drawing, consider what kind of personality you want your dragon to have. "Often I opt for proud, sarcastic, ill-tempered… or some combination of all three," says Stone.

"Keeping this in mind while I work enables me – often subconsciously – to include visual cues to convey this to the viewer. Perhaps through a wicked toothy grin, or a mischievous twinkle of the eye."

Keep relevant photos next to you as you draw your dragon (Image credit: Alex Stone)

It can also help to draw inspiration from real-life creatures: if possible, visit a zoo and make some sketches from life; if not, sketch from photos. Gerard suggests making mental notes about your subject as you draw, to enhance your understanding.

"How far are the eyes from the mouth? How large is the upper jaw compared to the lower?" he says. "As you draw these details you're adding them to a mental library you'll be able to pull from in future. It also broadens your overall understanding of the construction of living things."

Then, when you start to draw your dragon, keep a collection of relevant photos next to you, to refer to as you work.

When creating the above painting, Stone was inspired by dinosaurs such as the Tyrannosaurus Rex, and used a photo of the creature's skull to inform decisions about the dinosaur's bone structure and anatomy. To supplement this, he referred to images of dappled light, forests and reptiles, for inspiration for colour, texture and lighting.

07. Consider the setting of your dragon 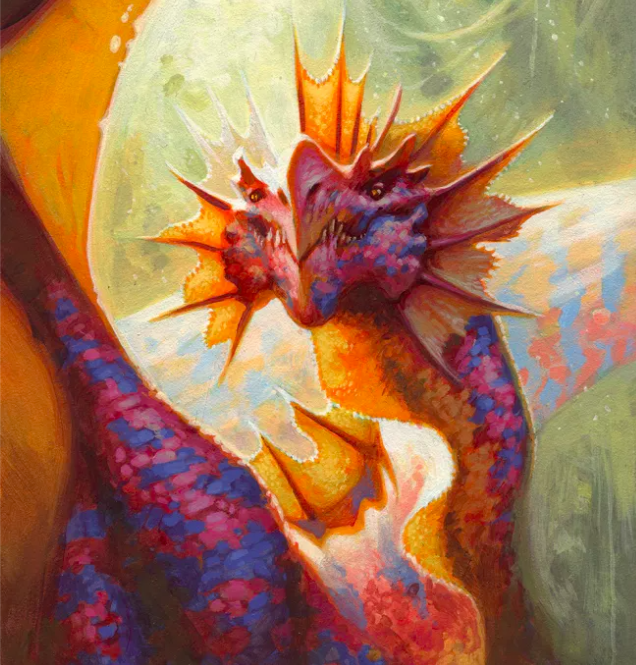 Think about what your dragon's environment will look like. This is another element that can be used to help imply story and add layers of realism and interest. In the painting above, Stone settled on a tropical setting, which led to a colourful design for the dragon itself, taking inspiration from tropical birds and reptiles. 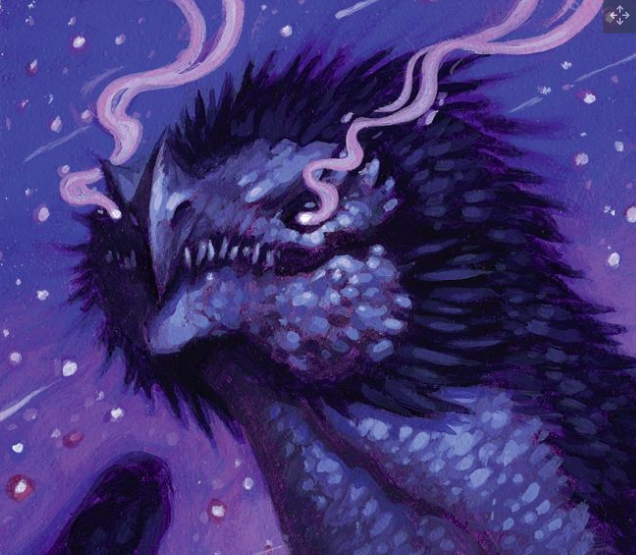 Think of what kind of texture you’d like your dragon to have. Is it covered in leathery scales, or hard plates, like armour? "I imagine that a very old dragon would have thick, gnarly scales, like an old crocodile, while a younger one might have a smoother, more even pattern," says Stone.

"If you’d like to be a little unconventional, consider painting a dragon with feathers or fur instead of scales. You can even look to materials like bark and rocks for inspiration. Try different things!" 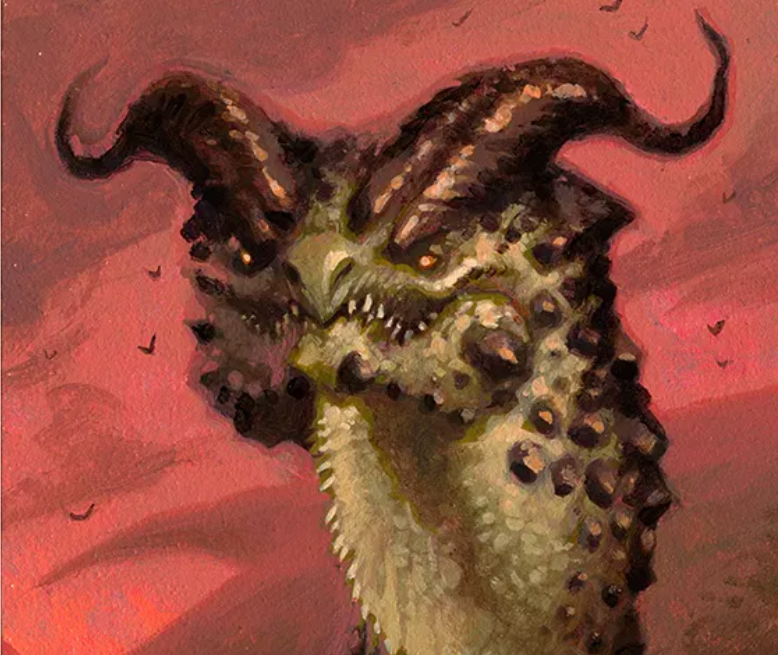 Adding birds is a simple way to indicate the scale of your dragon  (Image credit: Alex Stone)

One important thing to remember when learning how to draw a dragon is that there are visual cues you can use within your image to show its size. One common trick is to include some birds for scale, but you could also use surrounding architecture or other props to the same effect.

"Another concept that can easily be applied here is eye size," points out Stone. "Larger creatures (think whales or elephants) generally have small eyes relative to their size, and vice versa." 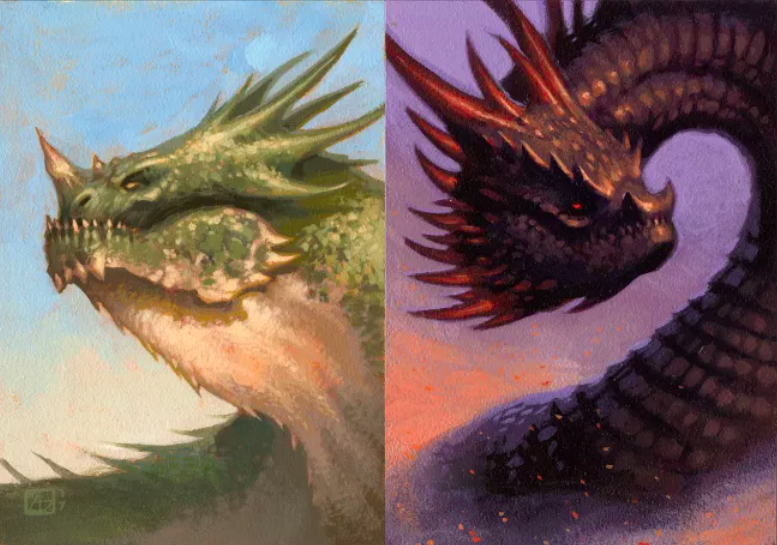 You also want to think about how much mass you want your dragon to have. "When painting a particularly old or powerful dragon, I like to make it look heavy," says Stone.

"I take inspiration here from old crocodiles or turtles, with thick scales and flesh that hangs down, particularly around the neck. If I want a dragon to look more graceful then I’ll make it lithe and use smooth, flowing forms when designing it."

11. Enhance the dragon with dramatic lighting

Lighting is a powerful tool, and can transform a painting of a dragon. "Placing a spotlight on the dragon’s face will draw the viewer’s attention, especially if you obscure elements closer to the edge of the painting in shadow," explains Stone.

"Lighting can also be used to build mood. Lit from below, with its eyes obscured in shadow, a dragon will look much more intimidating, whereas rim light can make a dragon look epic and beautiful." 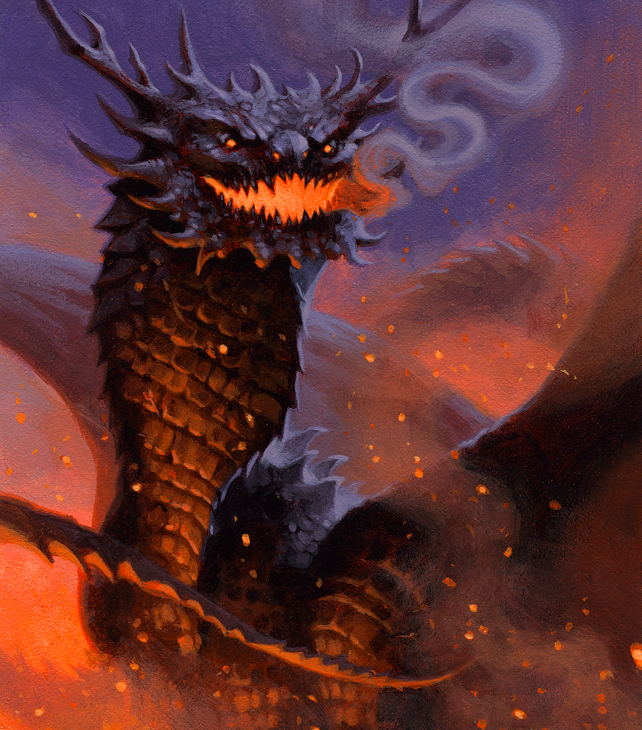 This rule can also be used to amp up the drama of your painting (Image credit: Alex Stone)

The rule of atmospheric perspective dictates that objects at a distance will appear hazier than those in the foreground, and pick up the colours of the surrounding atmosphere. This can be used to emphasise the size of your dragon – adding a wing or tail receding into the background, for example, will help make your dragon look even bigger.

"An environment with more smoke, dust or moisture, such as fog, will have more pronounced atmospheric perspective, which also makes it a useful tool to build mood," adds Stone. 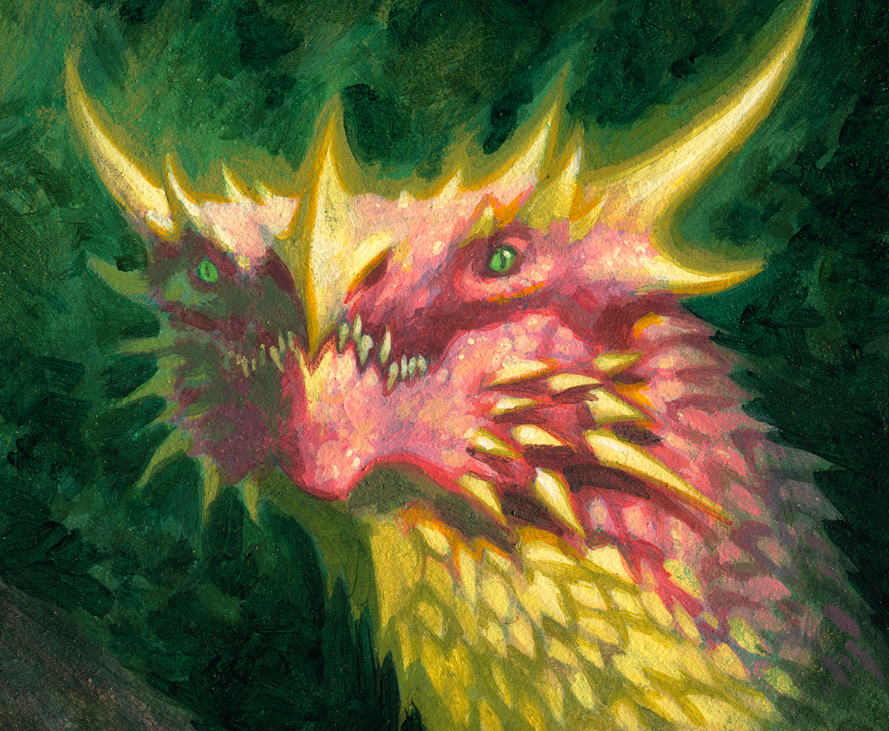 Try a contrasting shade in the background to make your dragon stand out  (Image credit: Alex Stone)

When thinking about colour and value, decide what colour you want your dragon to be, then work out a colour scheme for the environment that ensures the creature stands out.

"As a general rule,  I choose a value and colour for the background that contrasts with the dragon," explains Stone. "For example, if the dragon is dark with a lot of cool blues and purples, I’ll choose a light background with warmer reds and oranges."

14. Vary the edges in your dragon drawing 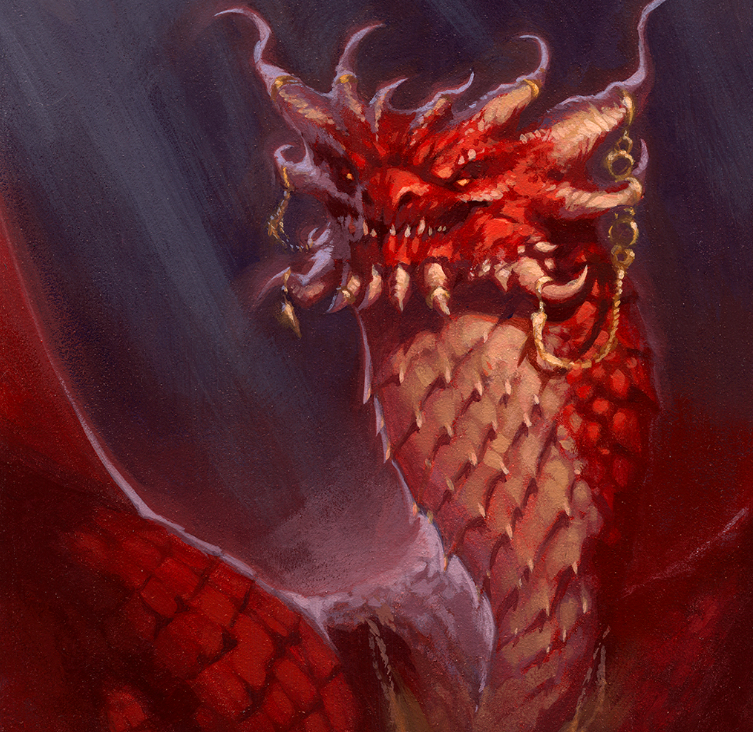 Stone advises using a variety of soft and hard edges to help direct the viewer’s focus and emphasise the feeling of 3D space in the image. "I keep the hardest, most crisp edges around the face and eyes. The closer to the ends of the painting, or further back in space the object is, the softer the edges become; sometimes they’ll be lost entirely," he advises.

"Edges can also be used to imply movement. A blurry edge on a wing looks like the dragon has just landed or is about to fly off, and helps to bring the image to life."

15. Take time over the dragon's eyes 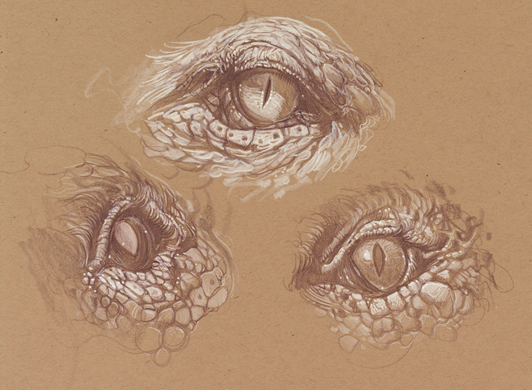 Eyes are windows to the soul, so make sure your dragon's eyes are full of emotion

The eyes are often called the window to the soul. When we look at a character in a painting, we will generally look at the eyes first – it's a hard-wired instinct for humans. What's more, a lot of information about a dragon’s personality can be conveyed through its eyes. So it's important to capture your dragon's eyes correctly.

"Take some time and make studies of reptile eyes and human eyes," says Gerard. "Find which ones are the most expressive. Which ones communicate what you’re after the best? Try combining them to achieve something new."

Play with different types of eyes until you find the one that captured the personality of your dragon, and the mood you're trying to create. "I find that including the pupil tends to make them look more 'human' and intelligent," adds Stone.

"Beady and glowing, with no pupil, and they’ll look more feral, animalistic and threatening. A wide-open eye might indicate inquisitiveness and curiosity, while one half-closed might convey arrogance and nonchalance. Placing the eyes in shadow can make a dragon look very menacing and wicked."