How to Draw a Nose

Why Learning How to Draw a Nose is so Important

Learning how to draw a nose is one of the most important aspects of creating a portrait or a character design. And, if you follow and practice these simple steps, you’ll soon be drawing noses with complete confidence.

In this article, you’ll learn:

And our tutor, Sycra Yasin, will also be showing you how to draw a nose from the bottom view looking up.

Doing these exercises will help you understand the construction of the nose and encourage you to start seeing the nose as a 3D object.

And, once you’ve practiced these simple techniques, you should be able to draw the nose from any angle more easily!

Drawing the Basic Angle of the Nose

Think of the nose as a series of flat planes

To keep things simple, try and think of the nose as a series of flat planes which look different when viewed from different angles.

In fact, no matter what you’re drawing, it’s always a good idea to break the object down into simple shapes, and then add more detail to these simplified forms as you progress. This is a particularly useful technique to learn if you’re just starting out as an artist.

At this stage, it’s probably a good idea to look into a mirror and take a good look at the bridge of your nose and your septum.

Do you see how these parts of your nose can be broken down into simple shapes? As you’re no doubt starting to find out, learning how to draw nose really isn’t all that scary after all!

Drawing the Ball of the Nose

Create the ball of the nose by drawing a circle

The next part of learning how to draw a nose is to add is the ball of the nose. You can draw this as a simple circle, but it’s important to remember this: Even though you’re drawing a 2D circle shape, what you’re actually representing is a 3D shape with depth and form.

Drawing the Nostrils and Flares

Remember to leave a space between the nostril and the flares

Now, here’s where learning how to draw a nose can get a little more challenging. Firstly, you’ll need to make sure you leave a space between the nostril and the flare of the nostril like in the illustration above.

Secondly, you’ll need to ensure the nostrils extend towards the ball of the nose in the middle. You’ll also need to leave some space between the nostrils and the septum.

By now, you should have developed a better understanding of how the nose is constructed, and how it’s attached to the face.

When you’re learning how to draw a nose, you’ll also need to take the roundness of the mouth into account. This is because the mouth sits on the curved surface of your skull underneath, and the shape of this will naturally affect the shape of the nose that’s attached to it.

And, talking of attaching the nose to the face, that’s exactly what you’re about to learn how to do!

Attaching the Nose to the Face 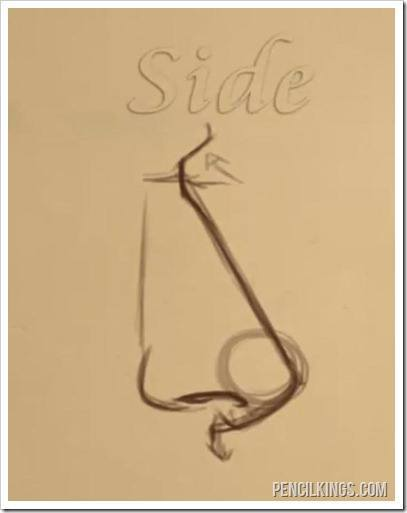 The brow bone joins the nose to the face

So how do you attach the nose to the face? Well, at the top of the nose, the underlying structure changes from cartilage to bone.

You can try this out for yourself – just feel your nose with your fingers and lightly move your nose around.

Can you feel the difference between the soft, bendy cartilage along the bridge of the nose and the hard bone at the top?

This hard piece of bone is your brow bone. It runs from the skull at the top of your nose, and extends vertically before extending outwards to form the brow bone above your nose.

Understanding the Surface Direction of the Nose 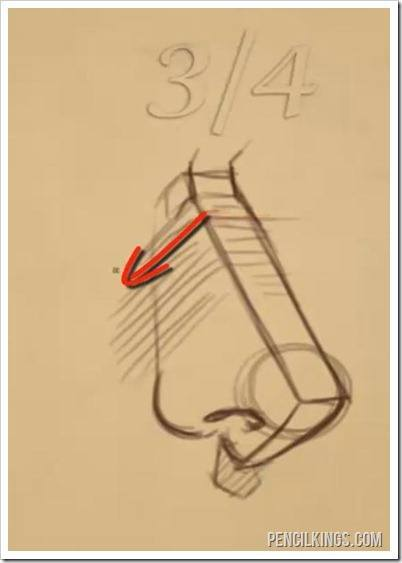 In this image, you can see the direction of the surface lines on the nose. As these surface lines move from the side of the nose into the cheek, they get smoother.

Because of this, it’s not necessary to draw any hard lines separating the nose from the cheek.

Understanding the surface direction of the sides of the nose comes in really handy for when you want to begin adding more detail to your drawing with lighting and shadow.

Defining the Eye Sockets and the Bridge of the Nose

You’re now ready to start adding some lines to define the eye sockets and the bridge of the nose. Sketch these in lightly, just like in the illustration above. Do you notice how drawing these lines helps to define the shape of the nose and how it sits upon the face?

Use light, diagonal strokes to indicate the line along the bridge of the nose. This will give it a nice, soft effect.

Remembering the Main Parts of the Nose

For the last part of this lesson on how to draw a nose, let’s go back and take a second to memorize the basic parts of the nose. Understanding these key elements will help you draw any type of nose more easily, and you’ll be able to see the differences between various noses more clearly.

The Main Parts of the Nose are:

In our next lesson on how to draw a nose, you’re going to learn more about drawing different types of noses in different styles. And, because you now understand the basic construction of the nose thanks to this lesson, we hope you’ll soon be able to draw endless varieties of noses!